Times New Viking stills for "No Room to Live" video (a few).

I did twenty some drawings for the TNV "No Room to Live" video along with many other Columbus based artists. I only had a week and a half to do them b/c I was leaving town. I basically tried to keep each one at about 2 hrs a piece which was a huge challenge for me. I also tried to cut corners whenever I could. I had this drawing of Ron House from the Psandwich record cover I did that was thrown in the mix for a few frames when I ran out of references. Anyway, it is a nice nod to one of the originators of the 'Columbus' sound as well and I thought it would be a nice surprise. If you blink you can miss it. Since I was running out of time I decided to cut the previously drawn heads of Jared and blow them up and photoshop them on to the paper "line" frames that I was given to color. I wanted them to be deliberately different from the earlier frames I had done (grayscale two below) especially since I was re-using imagery. So, in addition to blowing up the heads I MS painted their clothes so the color would look blocked in, in contrast to the resolve in the face. I also like the outlined Bourbon street environment makes for some nice visual noise as well. I think they turned out better than the drawings I spent so much time on. It's okay tho. It forced me to do different things that I would have normally which is a great thing. When I figure out how to embed video on this thing I will post video. Video by Pelham Johnston and Brandon Reichard. Thanks to them both and TNV. 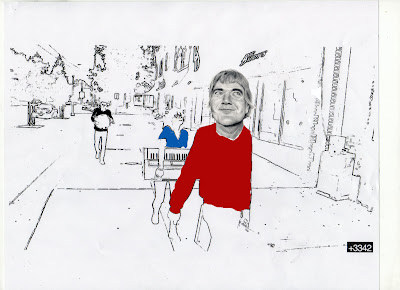 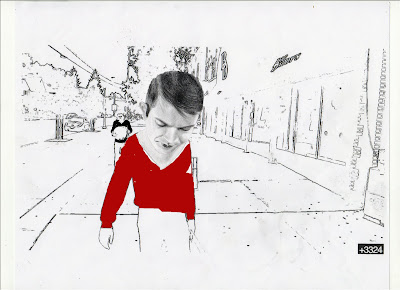 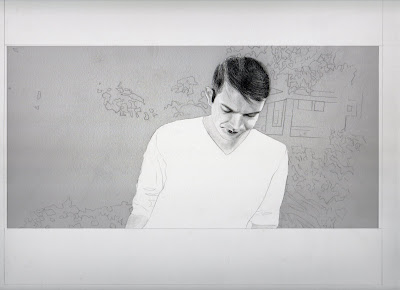 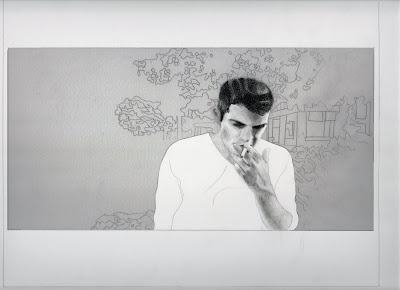